Alge Elastic, a textiles manufacturer from Lustenau, Austria, is renowned for producing a large variety of elastic ribbons, like for underwear and for ski goggles. Now they have developed a production line for digital printing on these ribbons. 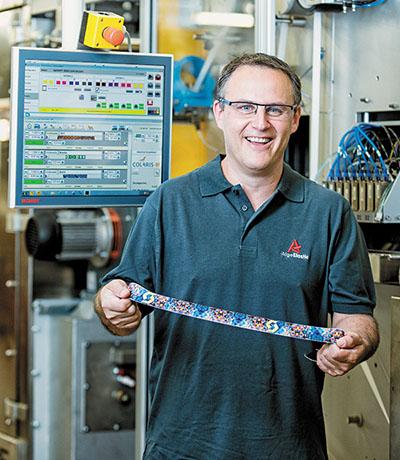 Until now printing was executed by applying transfer foil to the not tensioned ribbon. As a consequence, unprinted sections became visible as soon as the material was stretched.

The new printing method applies the design to the stretched ribbon, using acid dyes. This also leads to a clear improvement of color fastness. The main challenges of developing this new technology were printing a design in horizontal enlargement, precise color positioning and immediate drying. The newly installed line is capable of printing the ribbons at reduced setup time, better quality and shorter processing time. 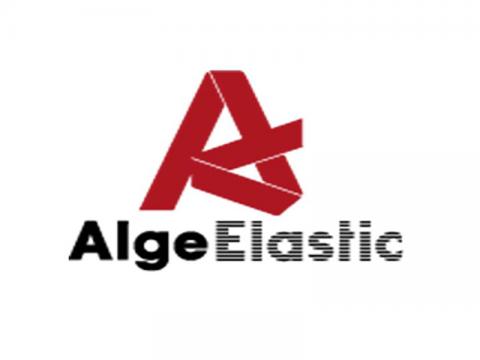 History
The cradle of Alge Elastic. From finest embroidery.

Where the Rhine forms the border with Switzerland, soon before it reaches Lake Constance, lies the Vorarlberg community of Lustenau. This is where the history of Alge Elastic began in 1923. Company founder Albert Alge created embroidery that soon gave this region international renown. This marked the birth of Albert Alge KG.

From a vision to market leadership.

1932. Albert Alge was one of the first to recognize the market potential of elastic bands and braids. The early years in the 40s and 50s were characterised by innovation and willingness to invest. The company saw its first expansion in 1947, and in 1950 it acquired is trademark license, Gold Zack, and in 1954 the purchase of the first needle weaving machine in Austria provided sensation in the industry.

In order to fuel continuous growth, the original company building gave way to a large new building in 1975. The acquisition of the united textile band factories in Hornstein, Burgenland, in 1982 eased production bottlenecks. The branch in Lustenau was not integrated until 20 years later. A large fire in 1988 destroyed the entire production and warehouse facilities in Lustenau. Not two years later a new, bigger factory was operational in the Nord industrial site in Lustenau. Now, the entire production is under one roof. In 1993, the Gold Zack licence was replaced with a new brand called KURTíS.

The pioneering spirit in the early years can still be felt today. Kurt Alge was the embodiment of the founding spirit and he continued to build up the company until his death in 1998. Following the untimely passing of Günter Grahammer (managing partner) in 2010, the management team led by Hanno Alge continues this tradition with success. High quality, flexibility and pleasure in innovative product solutions characterise Alge Elastic. Visitors can sense this creative spirit at every turn. This is the birthplace of tomorrowís fashion.

Since 2009, great value has been placed in designing innovative products such as technical items, bands for the medical industry and bandages. Work on the new 4000 m2 premises to provide additional production capacity began in 2011. The new premises were inaugurated and operational in April 2012.